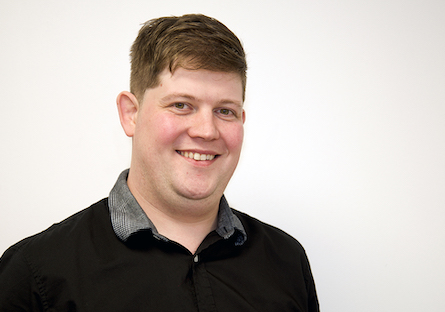 Since we started apprenticeships in 2018, over 100 colleagues are now on the programme, with 50 starting in 2019. Through their apprenticeships, colleagues in Bexhill, Leicester and Homeworkers work on developing their knowledge, skills and behaviours in their role and ultimately, by the end, achieve a nationally recognised qualification.

Why did you choose to start the apprenticeship programme?

I left sixth form without the grades to move to university, since then I found myself in IT working for the NHS and have worked through various roles. At Hastings Direct I was at a time in my life after having a child and getting married that I wanted to formalise my career in IT with a degree. I initially looked at doing this though the Open University but after speaking with my leader, discovered there was the opportunity to do it as an apprentice within the company.

It will formalise my role in IT, until now I have been doing IT because I have the experience and have learnt along the way. This will put an official stamp on it saying “I’m an IT person” with the qualifications, so it is nice to learn in a formal way how to do things “properly” rather than finding a route that works for me without knowing if it is right.

Relax, sure there may be occasions when you have challenges but think of the end goal. When you complete the apprenticeship you will have something that will set you apart and help push you forward and the inconveniences will all become worth it.

How do you think the apprenticeship has supported you in achieving your future career or development goals?

It has certainly helped with being clearer in my explanations to policyholders around technical knowledge. I hope that when I decide to move on from my current role that it will have given me that extra edge.

Was there a time you felt outside your comfort zone during the programme?

Having to take functional skills maths again was a real challenge, it’s been a long time since I have had to think mathematically and the way maths is taught is very different.

Although it does not sound like a lot of work, it does require quite a bit of commitment both inside and outside of work. You should be really sure that you are prepared to make that commitment.  Also when on a programme, make full use of your apprenticeship coach to guide you if you are unsure of what to include, especially at the end of the course when you build a portfolio of evidence.

Why did you choose to embark on the apprenticeship programme?

I had been interested in completing my CII exams for quite some time and had been asking about it since my time working in Renewals. The reason I wanted to get involved was to learn something new and have a bit of a deeper understanding of what we do as a business and hopefully get a better understanding of the reason we make certain decisions.

How have your skills and knowledge developed since being on your apprenticeship?

It has meant I have a better understanding of how insurance works, what can affect it and some of the reasons we make certain decisions. It has given me insights into different areas of the industry that I hadn’t known about before, hadn’t had the opportunity to look in to more or didn’t even know about to start with!

Apply! Never stop learning and you never know where it will lead. But once you’re on it be prepared for a lot of information to come your way. Also if you get knocked down don’t give up, it’s not designed to be easy and you’ll get a great sense of satisfaction when you get over the line!

Why did you choose to embark on the apprenticeship programme?

I chose to go onto the apprenticeship programme to enhance my leadership skills and gain new insights into leadership as a whole.

What has been your favourite part of the apprenticeship so far?

How have your skills and knowledge developed since being on your apprenticeship?

I have been able to use the time management techniques to prioritise my work load as well as gaining a better understanding of my people. I have also adapted my own leadership style and been able to recognise gaps in my own knowledge.

I think that it has aided my personal development in some aspects, as some of the leadership styles are very relevant to the role I want to be in however, I do feel this particular programme would really value someone who is new to leadership.