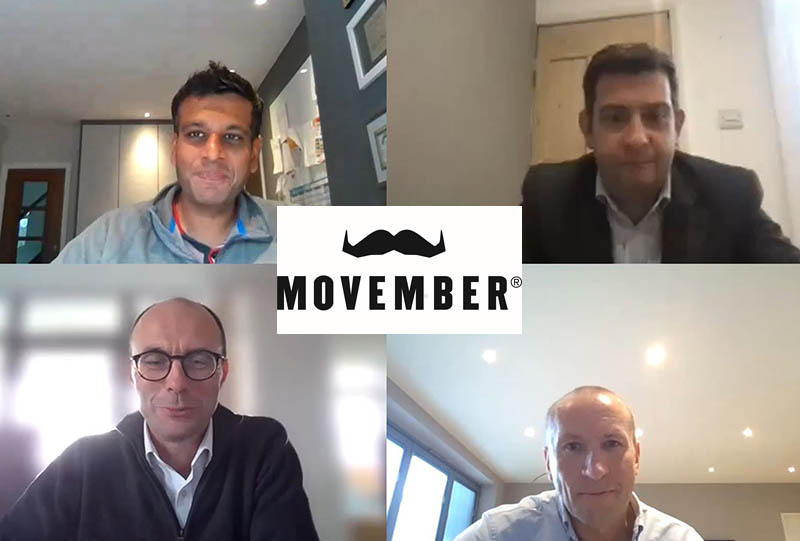 As we continue to highlight Movember and the work that the charity does to support men’s health, we hear from some of our executive committee members along with Dr Adam Huxley, co-founder of mental health app Thrive and consultant forensic psychologist, as they discuss what men's health means to them and how they look after their own wellbeing.
Executive committee members, Angus Eaton, David Walker and Jatin Patel, spent some time talking about mental wellness, particularly over the past 18 months, and supporting themselves and our colleagues.

What is wellness and what does it mean when you're not doing so well?
ANGUS: I know when I’m feeling well from a mental health perspective, my mind feels clear and in control. The flip side is when my wellness is not so well, I can feel physical emotion and tiredness but equally it can also be chaos in my mind and that chaos can feel disquiet at times.
JATIN: Wellness for me is that feeling of content in what you’re doing – engaged and happy in the situation you’re in at home or work and feeling in control. When I’m not feeling well, the mental and physical side come together - I can often tell when I’m in a conversation or should be engaged with something and my mind is wandering – for me that’s a sign that something isn’t right from a wellness perspective.

As men, we don't struggle to say how we feel physically but do when discussing how we feel mentally, why do you think that is?
DAVID: I can’t always differentiate between physical and mental wellbeing as they have such cross over. If you’re feeling energised, whether physically or mentally, it’s a great indication you are feeling on top of things. If I’m feeling motivated, whether at home or work, I feel a sense of calm and control, however, I don’t like it when I don’t feel these emotions in a situation. When I’m feeling the opposite to all these things, I know I’m not in such a great place. I can over focus on situations and have conversations in my mind which can be disproportionate or out of context.
ANGUS: Another way in which I know that I’m not so well is when my wife tells me – sometimes she sees it before I do and she’ll say something and she’ll be right. Sometimes it can be a surprise, but she has seen something that I may not have necessarily spotted within myself.
JATIN: I might find it difficult to initiate that conversation, to say I’m not feeling great, even with people close to me like my wife or people I know well, but especially with work colleagues. But when someone opens that door and asks the question, there are certain personalities, including myself, who just need that opportunity to let it all out. The key thing for me really is to not be afraid to ask the question as that’s often all someone needs to open up and start a conversation.

What are the negative impacts of not looking after yourself?
ANGUS: I can get tetchy. I’m generally quite calm but when my mental health isn’t so good it starts to bubble up and can sometimes explode, even when I know it’s coming. I can also go very insular and exceptionally quiet, everything is going on in my head and I feel I’ve got to sort it all out on my own.
JATIN: I find it comes out in one of two ways – I’m a calm person but I can snap and unfortunately that can sometimes to the people closest to me. I can have period of time where I’m storing it all up and then my wife or someone close to me say something insignificant but it’s the trigger and I can have a completely irrational response to the situation. I can also retreat – but I don’t see that as necessarily bad, I see it as a bit of a defensive mechanism where I can feel the tension might be building mentally and I may be in a situation where if I interjected, I could give an irrational answer as I may not be thinking clearly, so sometimes I use it to my advantage and stay a little quieter than I maybe would do when I’m feeling more well.
DAVID: As well as retreating I can also feel withdrawn and lethargic and the tiredness that comes with that can feel on a downward spiral while you’re dealing with these feelings and the situation. Finding a way to break that circuit, whether it’s a conversation, a break from the situation or going to get some exercise, is really important.

Why do some men find it difficult to reach out when things are not so great?
DAVID: For me it’s a culture of upbringing, my parents have been quite tough on their outlook, often encouraging us to just get on with it than to talk about feelings. I think there’s still quite a stigma about being male. I see lots of posts on social media where men still talk about the need to be the man of the house, the lead, the bread winner and particularly during lockdown and Covid, the need to be the figurehead of the family and now feeling a sense of failure. I think there are still quite a lot of incorrect cultural influences, which thankfully, look like they are starting to reduce. But the result still is that we don’t open up enough and talk when things aren’t right.
JATIN: The other barrier is people thinking they are the only one. Sometimes people think that if they open up about how they feel, they might look or feel different but as more people are open and honest, it can help others do the same as they see the consequence as a positive one. In the last six months I’ve seen a more diverse way of thinking about it and people being more open. Social media has many negatives when it comes to mental wellbeing, but I also think it can be a force for good. If we can harness these different ways of communicating and connecting people and making people feel ok about talking through these new mediums, it can be good. Personally, a female relative has experienced depression and by her being more open about it and talking more, it has taught the men in the family, to have more open conversations and to know it is ok.

What are your tips for supporting your own mental health?
ANGUS: I definitely feel better when I exercise, although sometimes when I need it most, I might not have the time, but I have learnt to say I need the time to break away from a situation. I’ve also got better at talking when I don’t feel right. I’ve also trained as a mental health first aider at Hastings, which has helped me personally and helped me help others.
JATIN: As well exercise, I also write down how I feel and, if I’m overwhelmed with what I have to do, I write down everything in steps to make it all feel more manageable and achievable. I also try and avoid distraction and create separation of time, which is particularly important now as many of us are working from home. I used to use my commute home as my separation between work and home, so now I’ve looked to put things in place to keep that separation – I turn off notifications after certain times, which means I’m checking messages at a time that is good for me and not be distracted by alerts when I’m having non-work time.
DAVID: Exercise is key for me but also some self-coaching. I try and work through a situation but with a first step of doing something about it but that can be quite difficult if you can’t quite get to grips with the problem. But by doing this you feel a better sense of control, which can energise you and help start to feel better about the situation.

How do you support your work colleagues?
DAVID: I look to encourage people to think about tools and techniques to help them feel mentally and physically balanced and help them feel energised and on top of life as much as they can. Also try to get to know your colleagues so that if something might not be right, you can recognise the right time to have a  conversation with them or some sort of intervention. I would also say to action when you feel there is something wrong rather than spend too much time deciding how to do it.
JATIN: Don’t be afraid to ask someone twice or a third time if they are ok because a lot of time they may need those extra prompts to open up and feel like someone actually wants to listen. Talking and conversation is definitely key.
ANGUS: It’s really important for us to remember that behind every role, there’s a human being. Also, as well as investing time in enquiring, you should invest the time in listening. I think one of the most powerful signals is body language – it’s not necessarily what people are saying to you , it’s how they are, what they’re looking like and their demeanour. It’s also really useful to share your ways of helping with others and to remember that there’s maybe not always a solution but by listening and considering, it might just be the starting point some need.
JATIN: As people leaders, we should also lead by example - if we are more open and honest about how we feel, others will hopefully feel they can be too.